Another beautiful day....we breakfast outside at the Coco Loco and then drive up to the Castello where the Archaelogy Museum (and a number of other museums) are located.  The district is also the home to the University and has many picturesque narrow streets. After a bit of driving around before finding a parking space, we have a short walk to the Cittadella dei Musei, a complex that also includes includes the art museum and the Museum of Siamese Art - behind this impressive entry arch. We get in free....speciall consideration for the over-65 set.  The museum is in a modern building and is well lit: the displays are very attractive but there is little English explanation as we make our way from room to room on the various levels.  The museum is organized by digging site, not chronologically.  We especially like the recreation of the "tophet"--a open burial area where the remains of babies were placed in urns. the statues called "bronzetti" which are very old statues that are very detailed and expressive; 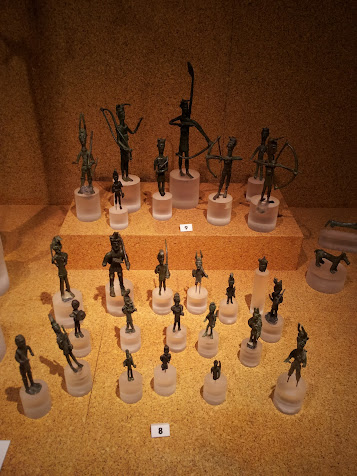 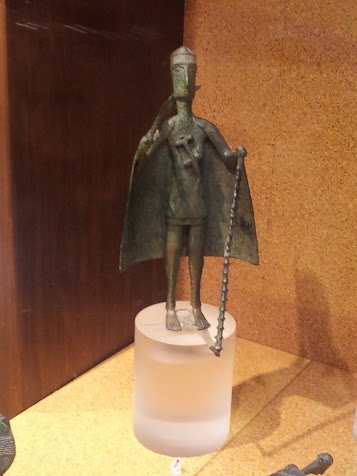 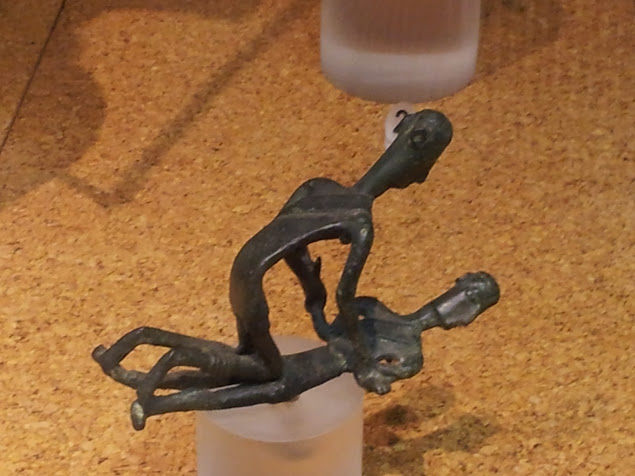 The star of the museum for us is this stelae from Nora which is the first recorded written evidence of the name Sardegna--dating from about 8000 BC.

Since we are in an archaelogical mood, we decide to drive about an hour north of Cagliari to see Su Nuraxi.  Sardinia is famous for its "nuraghi"--there are over 7,000 of these stone buildings scattered all over the island that date back to as early as the 13th century BC.  It is generally believed that most of these structures were used for defense...an early version of a castle.

Su Nuraxi is the one of the largest and is distinctive for its village of stone houses that are attached to the main building.  The main building was 20 meters high but the top part has been scavenged for other buildings over the years so it is now only 14 meters tall (about 45 feet). 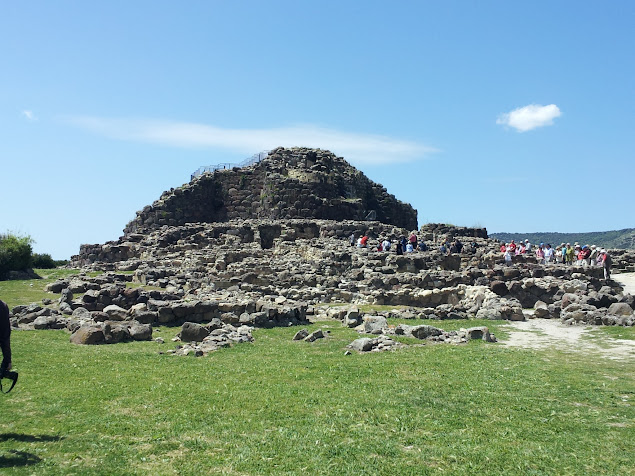 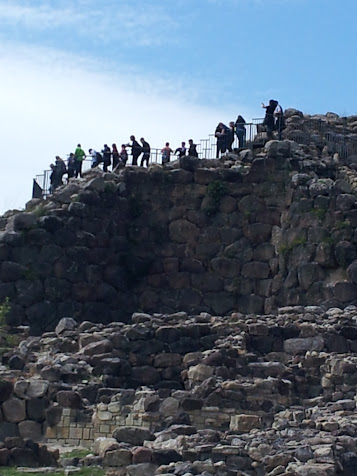 and then making your way down through the middle on more precipitous steep stone stairs.

On ground level inside the building, there is a well and the entrances to surrounding towers that were added on in later years.   The stone construction (no mortar was used) is quite ingenious 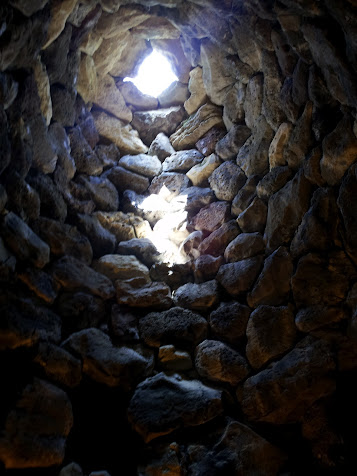 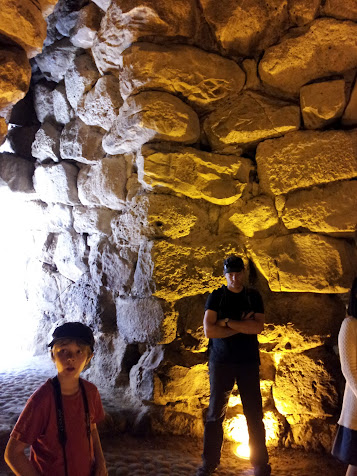 It is possible that there are still many more nuraghi to be discovered.....there are many "hills" that may yet be excavated to uncover more of them. 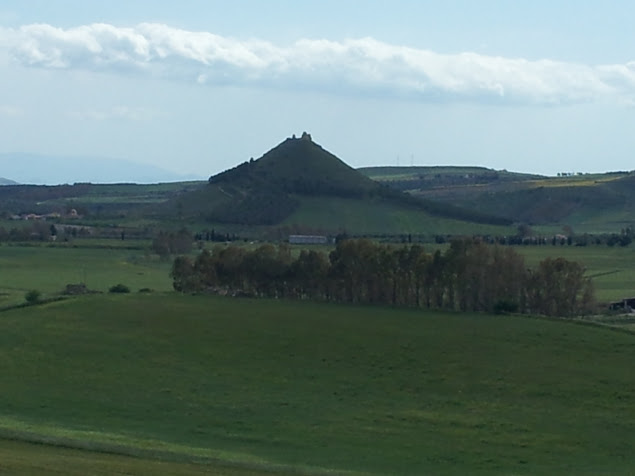 We take back roads to and from Su Nuraxi...we are driving through the Campidano plain, a major agricultural area.  The gentle rolling hills are punctuated by rock outcroppings and flocks of sheep. and flocks of sheep.

(Confession: the three pictures above are not mine.)

We eat dinner at Sa Piola, a stylishly rustic trattoria just up the street from the hotel and a favorite of the people at our hotel.  The menu is written mainly in Sardo so we depend on the owner Claudio for help in ordering.  We share an appetizer of fried meatballs and vegetables that are nicely prepared and delicious.  When we ask about some of the ingredients, he heads to his computers and googles the answer for us.  I have a pasta with a red sauce from the Campidanese (very light and fresh) and Diana has a Sardinian orechiette-like pasta with shrimp and artichoke--both very tasty.   Diana has an apple tart made with Sardinian pane carasau (the crispy bread known as "carta musica") and we drink a local red wine recommended by Claudio.  A very nice meal....

Tomorrow we are off for a drive along the southern coast to the island of Sant'Antioco.....

PS I did forget a major event from yesterday's report...we did find a laundromat and now have clean clothes.
Posted by Jim Zurer at 3:45 PM