Another bright and sunny day in  Cagliari...after breakfast with our friends next door at the Coco Loco Bar, we get in the car and drive west along the southern coast of Sardinia.

We follow the same fast road that we took to Nora but when we get beyond that, I am disappointed that there are no views of the water--either the road is a bit inland or there are gated communities and beach establishments between the road and the sea.  We finally get off the main road and head toward the beach at  Chia, one of the famous resorts in the area--long stretches of sandy beaches, pretty coves and a Spanish tower watching over it all. 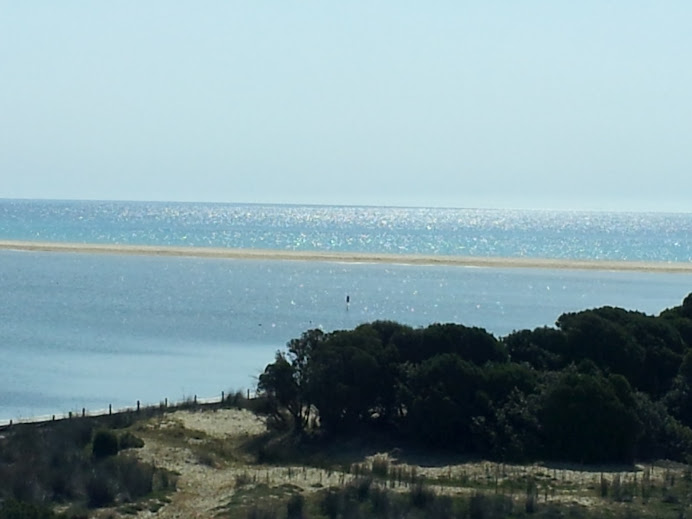 We did see three riders galloping at high speed across the sand bar but I wasn't quick enough to snap a picture.

After Chia, the road hugs the coast and gives us a lot of the views that we are looking for....panoramic vistas down the coast or closeup views of white sandy beaches and clear and colorful water. 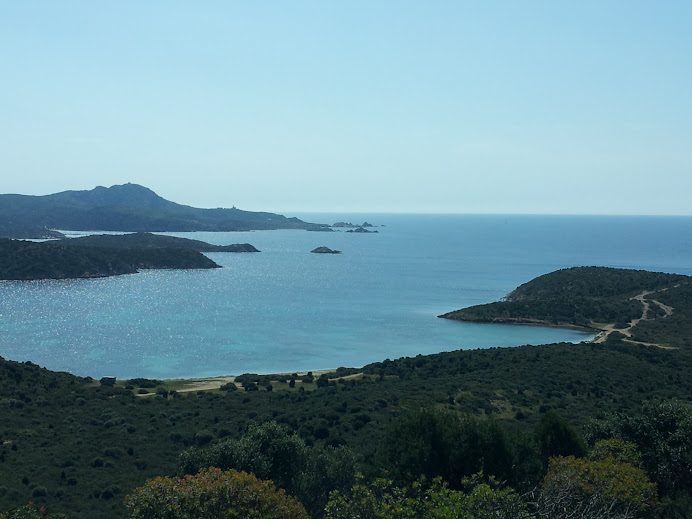 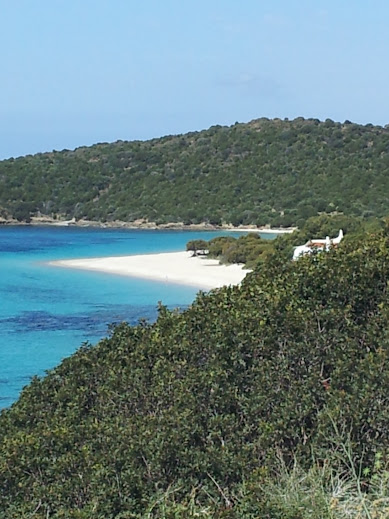 Even the Sardinian cows enjoy the beach.... 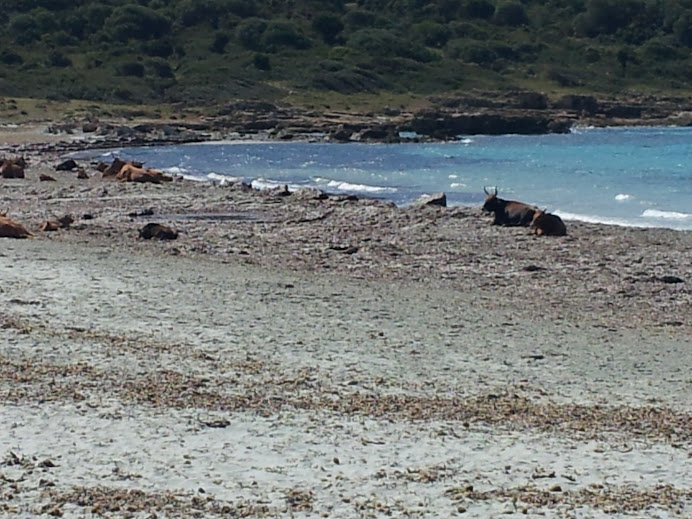 We arrive at our destination--the island of Sant'Antioco, which was an important Roman city.   The island is connected to the larger island of Sardinia by a causeway that was first built by the Romans.  There is a very large musuem and archaeological site here but we are not in a museum mood today so we drive on to the other major town on the island, Calasetta.  As we approach Calasetta, the weather turns threatening so we opt for lunch at a Slow Food restaurant called da Pasqualino.   We have a very good meal....tomatoes, tuna and onions first and then a fritto misto without calamari for Diana and couscous with fish and plate of mussels for me.   We follow part of our daytime meal rule and skip the wine.

I had hoped to be able to visit the other island of San Pietro but since that would have meant taking two ferry rides, the timing doesn't work.  So instead we take the road that circles the island--much of it through the rugged interior with occasional views of the water.

We drive on the fast road back to Cagliari and I set out to explore the upper city some more.  It turns out there were once Jews in Cagliari but they were expelled by the Spanish in 1492.  The section of town that they lived in was up in the Castello district but it wasn't a ghetto--they were expelled before ghettos were established.  There are still a couple of reminders of their presence however.....the via Santa Croce street sign shows that the name used to be Vico dei Giudei 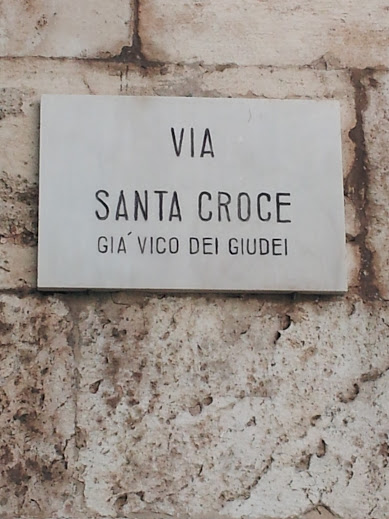 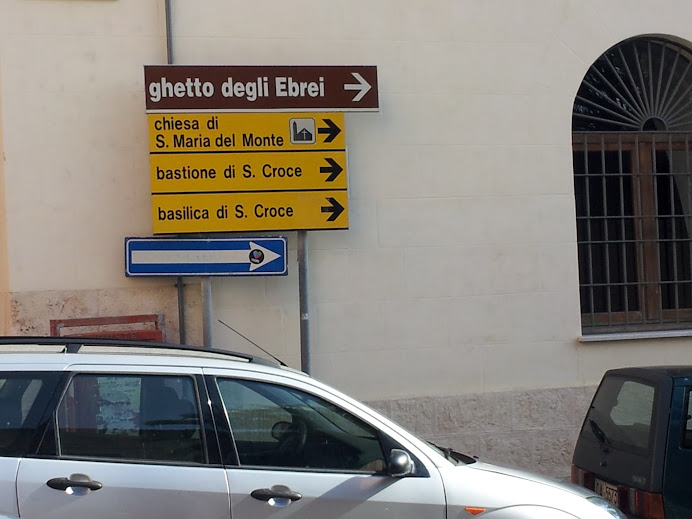 There are several impressive old defensive towers...one is called the Torre dell'Elefante (because of a small decorative sculpture of an elephant on its face.  It doesn't show up in this picture.) 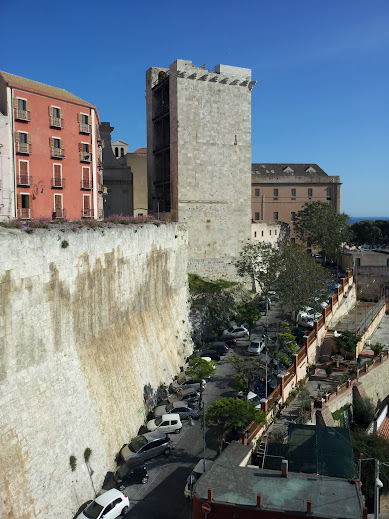 I walk past the big Pisan-Romanesque duomo 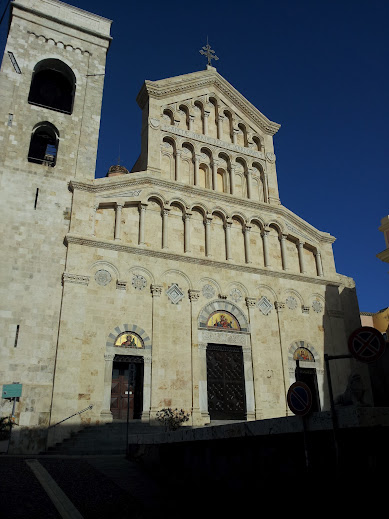 and end up at the very impressive piazza on the top of the Bastione di Sant'Remy. 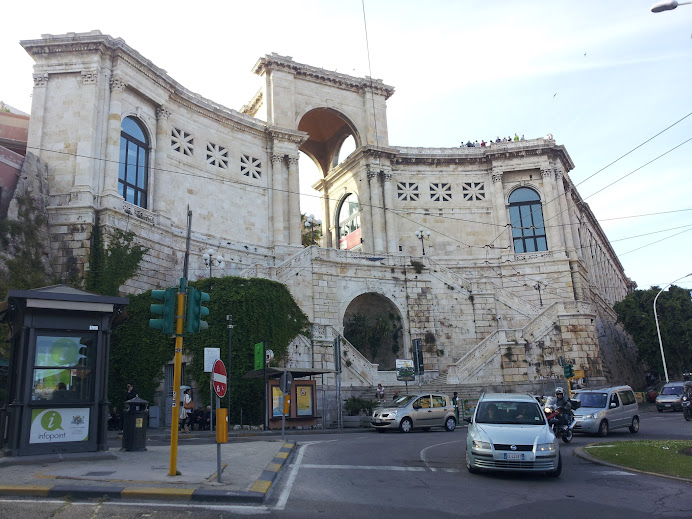 At the top, the views over Cagliari are great and it is a wonderful gathering place for the locals. 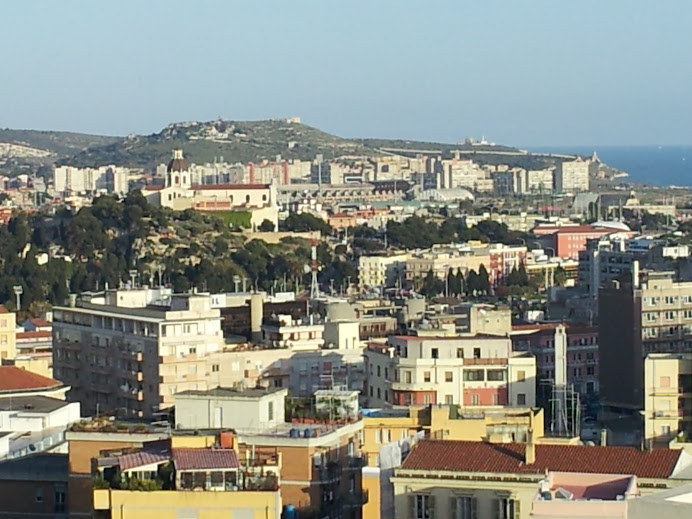 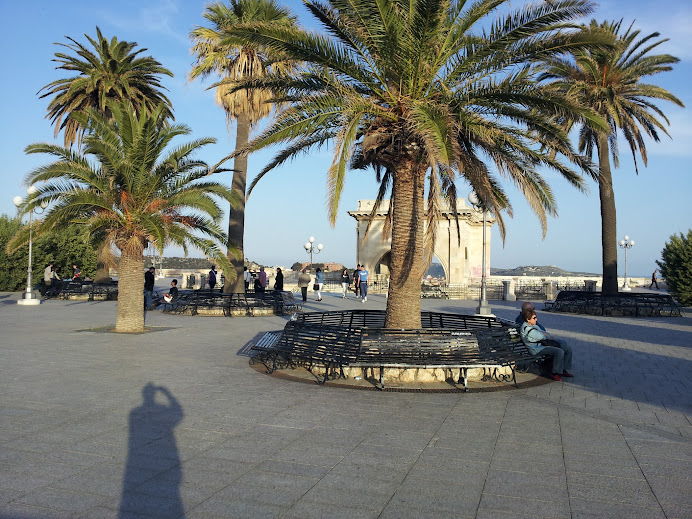 This is the evening that the procession brings back the statue of Sant'Efisio from the church in Nora and people are starting to gather to watch the candlelight march that welcomes the statue.  The procession takes the same route it followed on May 1 but in a reverse direction.

We have a quick dinner at one of the restaurants on the parade route and then stand on the street to watch. 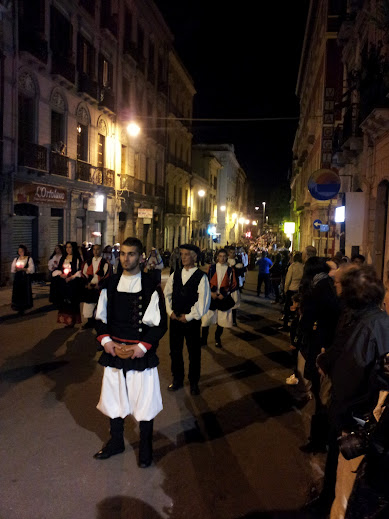 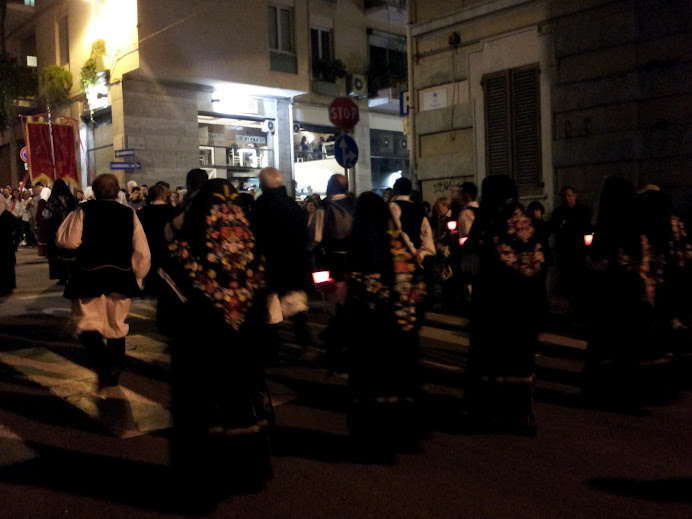 (Diana is again quite taken by the embroidered shawls you see in the picture....and may be looking to buy one.)

It is quite a solemn affair with religious songs being sung and prayers chanted and it goes on for a long time.

We go up to the hotel room to await the return of the statue which finally comes by about 11 pm.   The crowds are quite excited when the procession passes by. 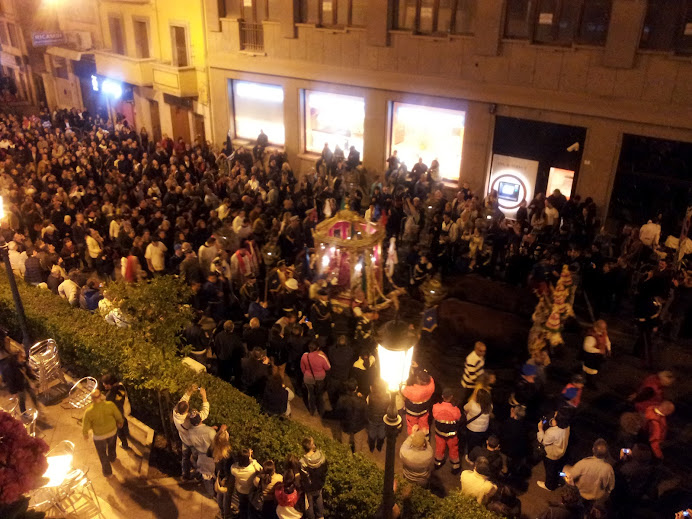 All in all it was terrific experience to be in Cagliari for the Festa and I am glad that Diana insisted that we come.

Tomorrow we pack up and drive to a fancy rustic hotel in the mountains of central Sardinia.

Jim and Diana
Posted by Jim Zurer at 3:27 AM