Today is the big day....the Festa di Sant'Efisio.  We have planned our itinerary in Sardinia so that we could be in Cagliari on May 1.  And when we wake up, the sky is gray and there is a steady drizzle--not a good sign for the Festa.

A bit of explanation first.....Sant'Efisio was said to be a Roman soldier converted to Christianity in the 3rd century.  While serviing on Sardinia, he refused to recant his beliefs and was beheaded at Nora, near Cagliari.  A church was dedicated to him and he became the patron saint of Cagliari.  In the 1650s, during an plague outbreak, the saint was credited with stopping the death toll and in 1657, fulfilling their promise to him, in thanks for his actions, an annual solemn procession from Cagliari to Nora and back was made.  Sant'Efisio was also given credit for foiling the French invasion of Cagliari in 1793.  Every year (except for 1917 during World War I ), the traditional procession to Nora and back has been observed...this is the 356th festa. 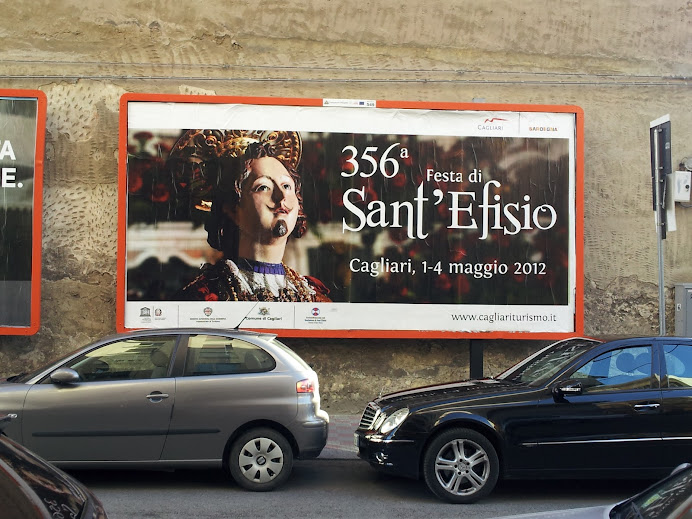 Early in the morning, while it is still raining, I walk up to the Church of Sant'Efisio where many people are coming to pay their respects before the procession begins. 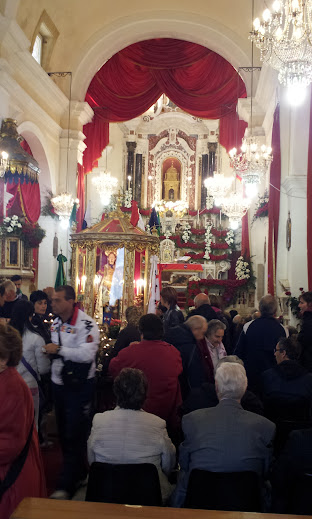 On the street where the procession assembles, I see some of the participants arriving.... 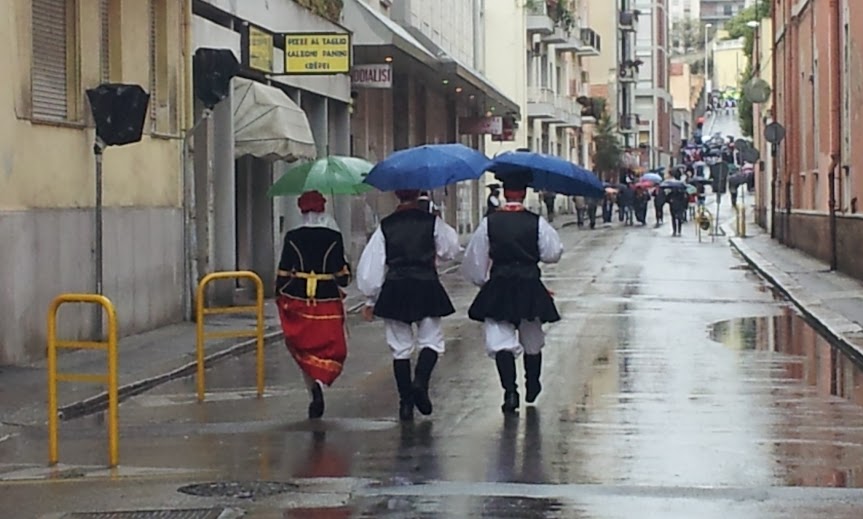 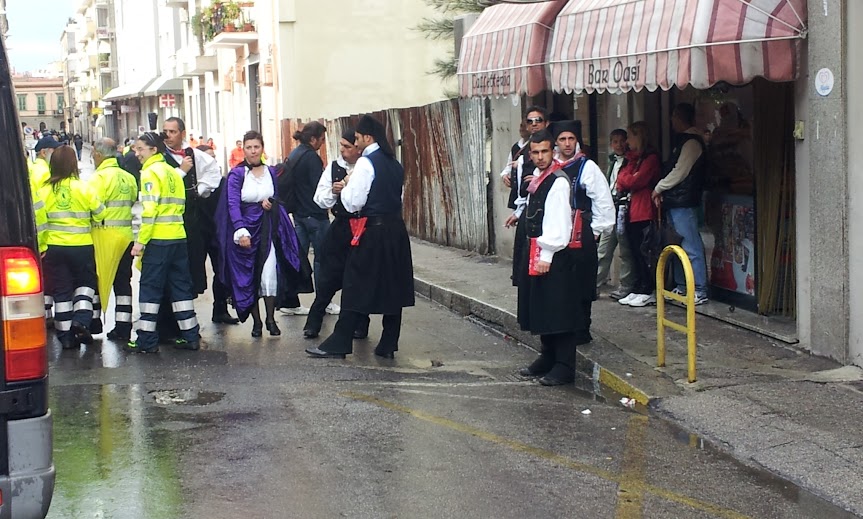 Around 9:30, the procession begins....it takes a long and winding route through the streets of Cagliari before the statue and its retinue leave town for the walk to Nora.

This annual Festa has become a big deal in Cagliari....there are thousands of participants.  The procession starts with more than 30 oxen-drawn carts from different communities around the island---the carts are decorated with flowers and ribbons, the people riding on the carts are dressed in traditional costumes and the oxen are wearing elaborate floral garlands. 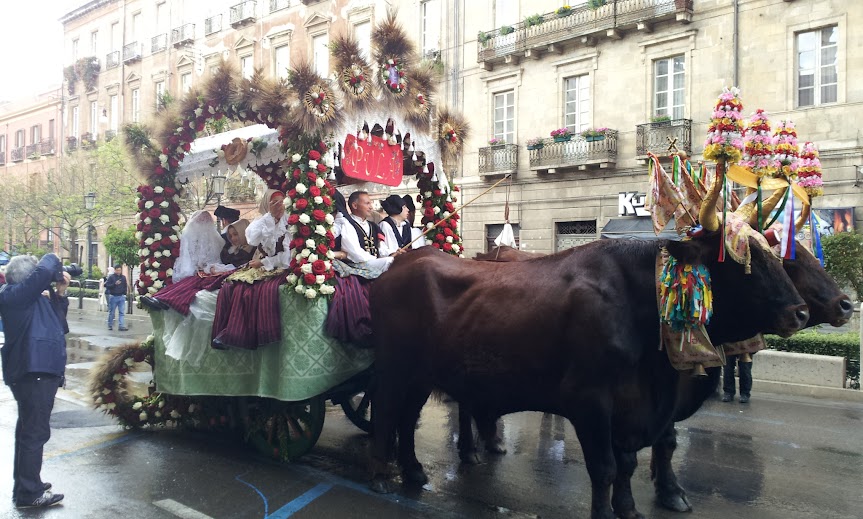 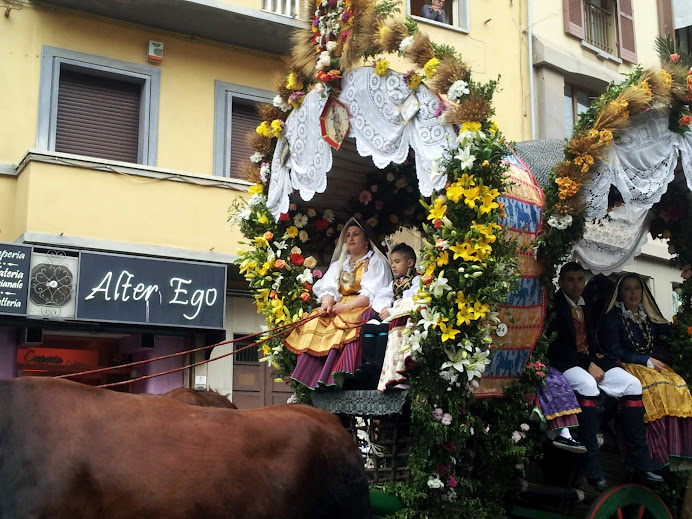 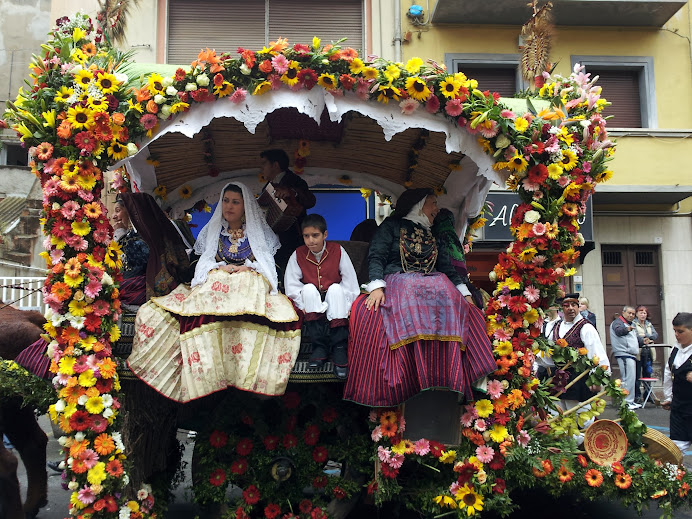 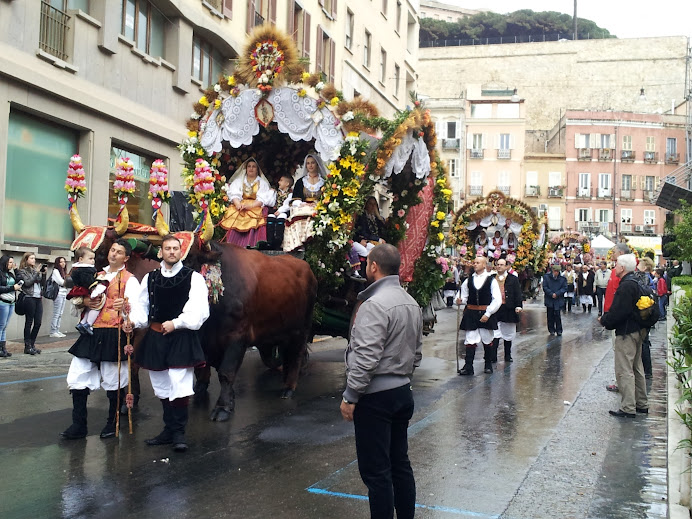 (These pictures were taken right in front of our hotel....and from our balcony, we had a birds-eye view of the procession.)

The rain stops and the sun comes out and the rest of day is warm and sunny.  The carts are followed by scores of costumed delegations on foot from many communities around the island...some are marching with local musicians and many are singing religious songs in what are apparently typical Sardinian folk-like melodies. 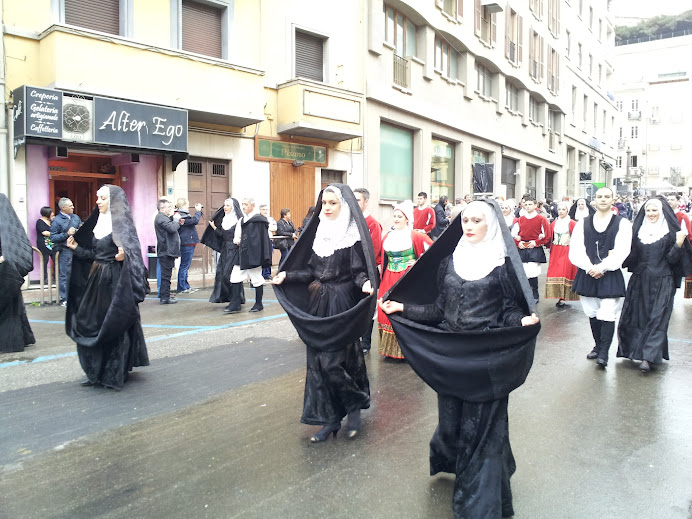 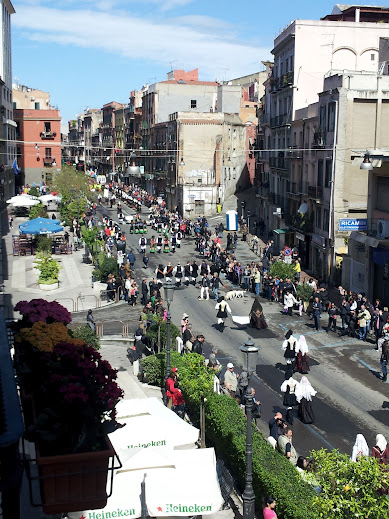 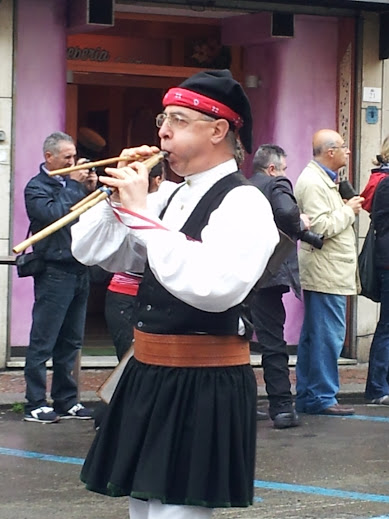 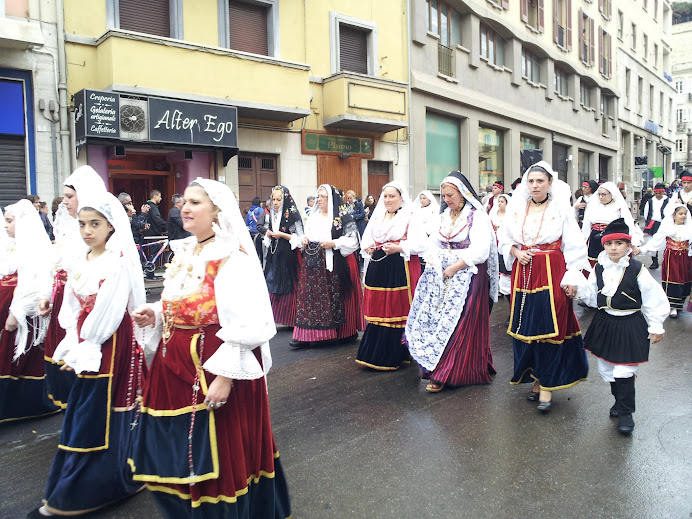 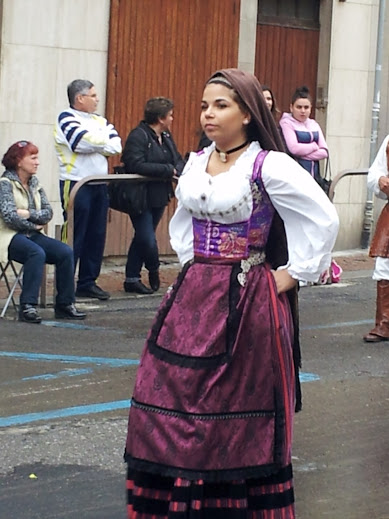 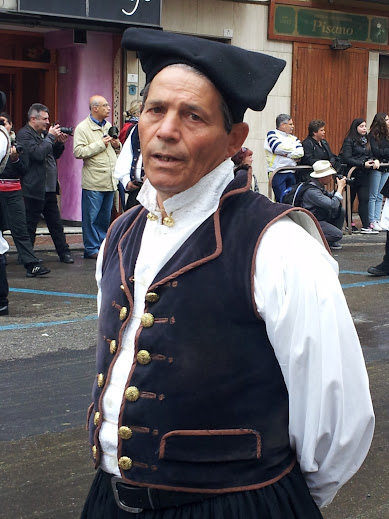 And then, on horseback, hundreds of riders in traditional costumes join in the procession - sometimes nine abreast. 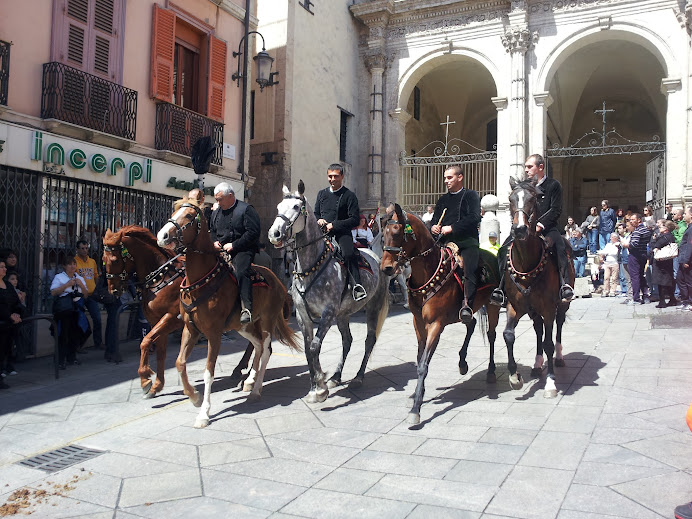 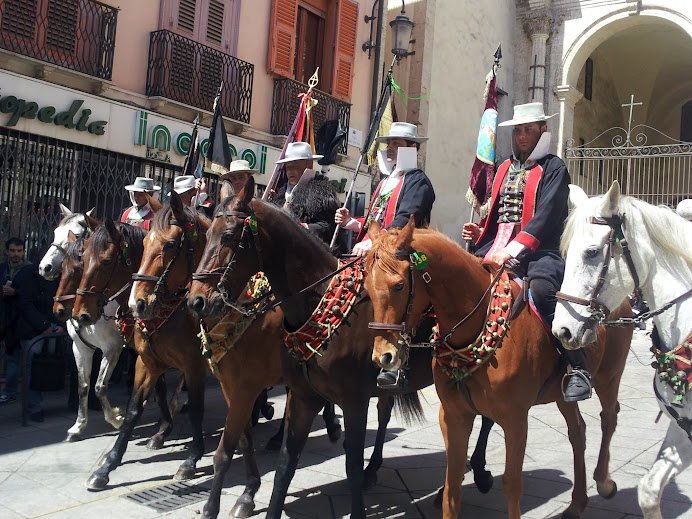 This "introductory" part of the procession ends and there is a pause until just after noon when the figure of Sant'Efisio is taken from the church and follows the winding route of the parade through Cagliari.  I am waiting at the church as the small square in front begins to fill up.  The oxen that will pull the carriage are standing nearby 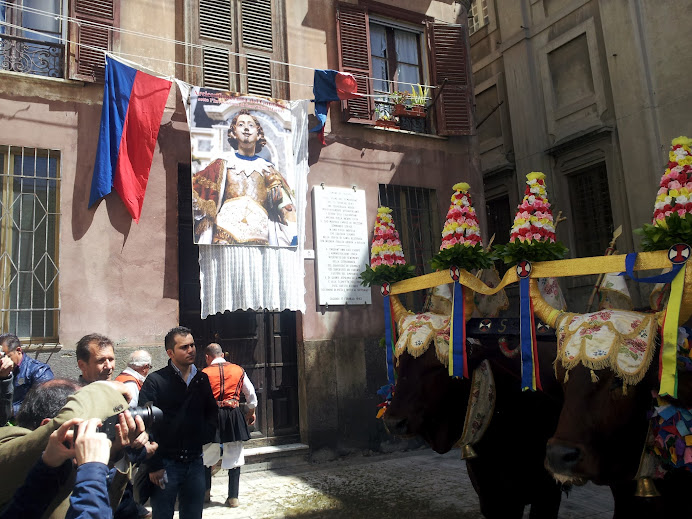 Finally the procession is ready to leave the church amid loud cheering and fireworks.  In the parade are the members of the church's confraternity, men dressed in formal wear and top hats on horseback, and other dignataries. 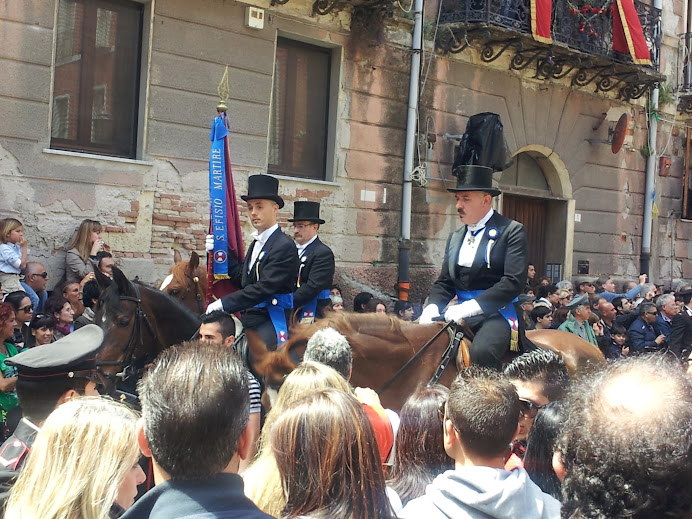 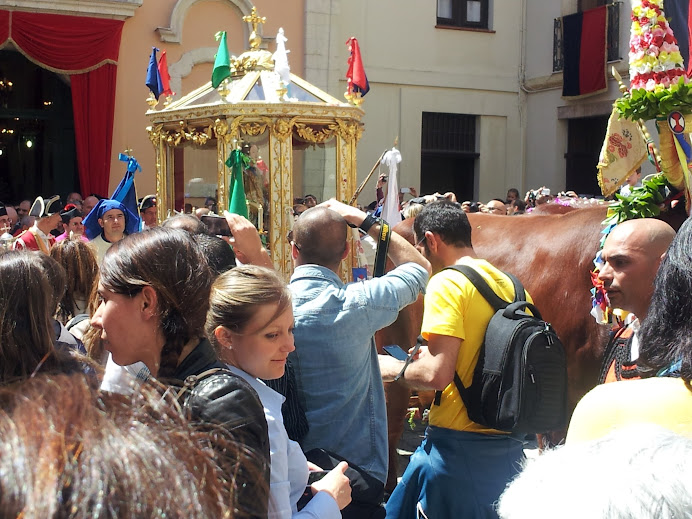 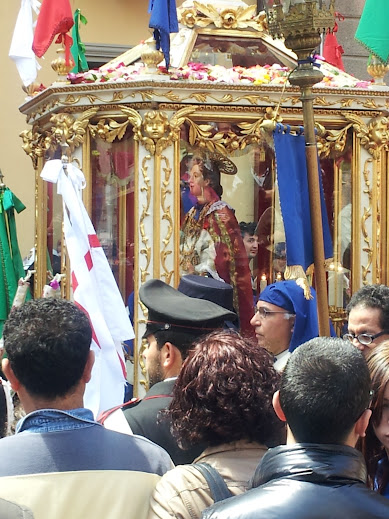 Flower petals are thrown from windows along the route and the crowds press in for a closer look and a chance to touch the passing figure of the saint, and then some join the procession behind the carriage. 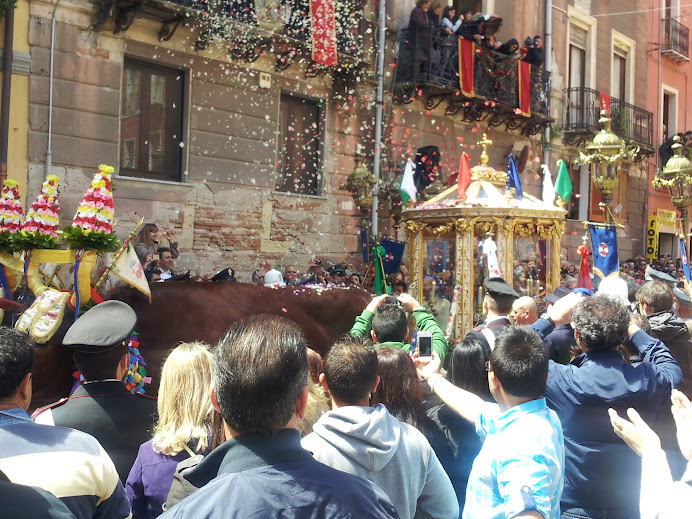 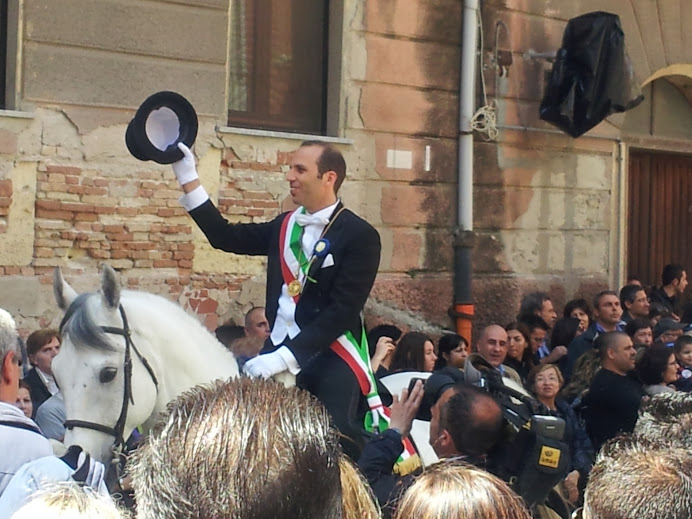 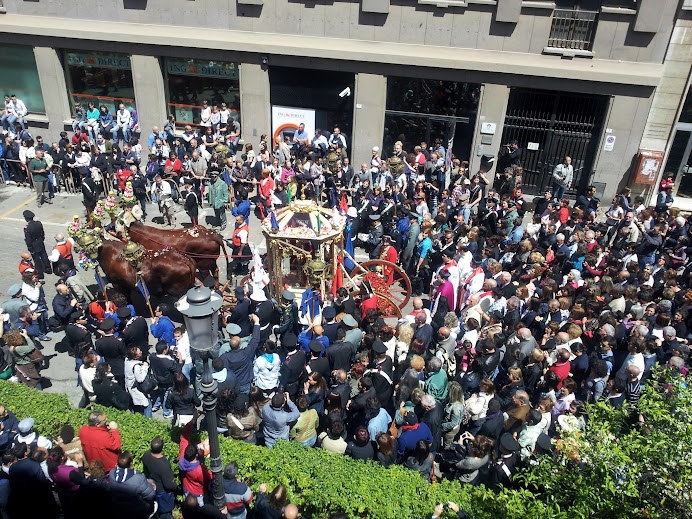 The procession finally passes the official reviewing stand in front of the city hall and a small group accompanies the carriage and oxen out of town for the 30 kilometer trip to Nora.

It is really quite an impressive festival...the participants seem very pleased to be included and the crowds lining the route are very enthusiastic.

After the procession, we walk over to the Piazza Yenne which is crowded with both onlookers and costumed marchers.  We have a quick lunch at a outdoor cafe sitting in the sun and watching the people.  We get in the car and drive up to the Castello district that dominates the town and where the cathedral and many of the museums are located.  But parking is at a premium and it takes a while to find an empty space.  We get out and take a look at the huge Roman amphitheater where concerts and plays are held during the summer 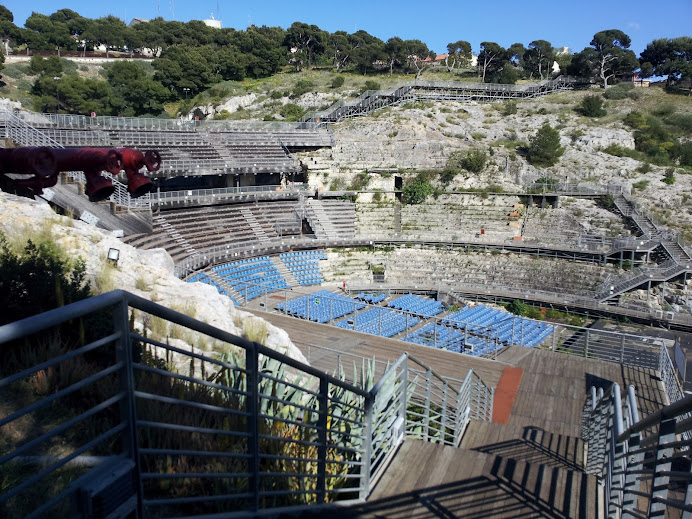 but it is closed up so we just look around from the outside.

I take a late afternoon scouting stroll looking for a self-service laundromat that we had heard was close by the hotel but after a long walk, I don't see it.  I do come upon a big concert of folk music and dancing in the Piazza del Carmine where many in the audience are dancing along with the performers. 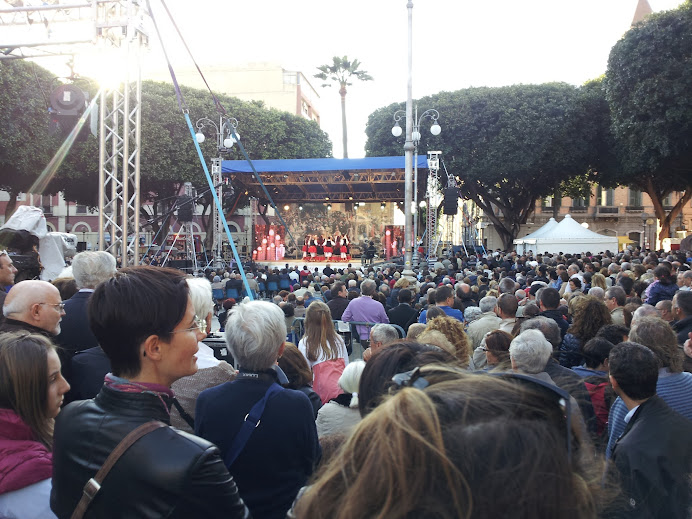 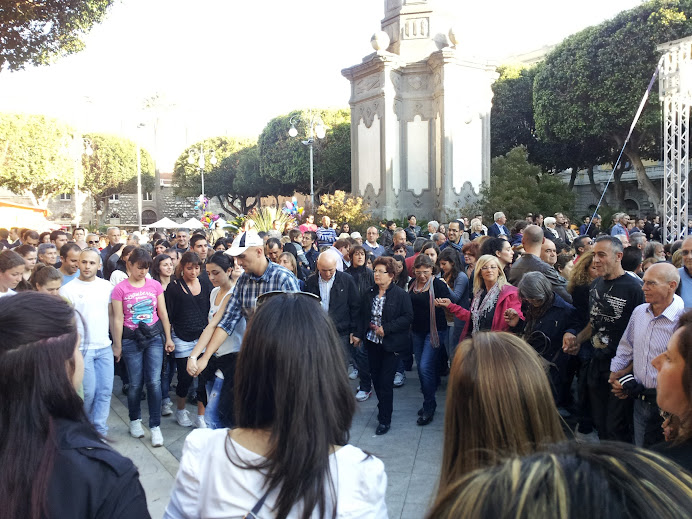 Dinner is at Su Domus Sarda, the Slow Food restaurant just down the street, where we tried to eat last night.  The food is very good...I have a plate of prosciutto and salami to start and a local pasta called fregola (like orzo but round) with sausage and mushrooms.  Diana has a cheese assortment and a "mixed grill".  The portions are too big to handle and we can't finish any of our dishes...putting a damper on our enjoyment of the place.

It is a short walk up the hill to our hotel....it has been a full and exciting day..

Tomorrow we are driving to Nora, an important archaeological site and also the destination of the procession.